It is one of 32 Weeds of National Significance (WoNS) which are agreed by Australian governments based on an assessment process that prioritised these weeds based on their invasiveness, potential for spread and environmental, social and economic impacts.

So what’s the issue with cat’s claw creeper? 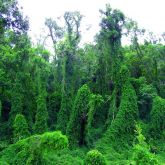 Cat’s claw creeper can spread very quickly with an ability to rapidly climb up trees smothering the foliage and eventually killing the trees. It can also cover bushland floors preventing any native plants from regenerating.

A very well adapted weed, the cat’s claw creeper develops tubers on its roots which allow it to survive for long periods in the soil along with its abundant winged seeds from long narrow pods which open and enable it to spread by wind and water.

How can you help?

It can be managed by: