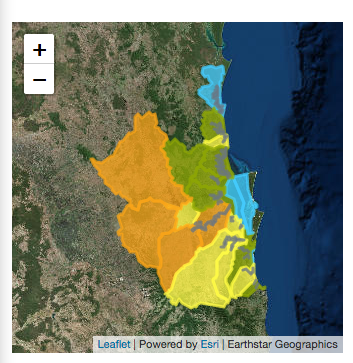 After attending the Launch of the Report Card 2018 on 11th December at Downfall Creek, I have compiled my notes and recollections of the presentations. You can view the full report card here.

The presentation by Dr Paul Maxwell, HL&W Principal Scientist, was insightful and clear. This made an understanding of the process easier.

My comments: Bulimba Creek is part of the Lower Brisbane Catchment, but was not mentioned specifically, so an average over all the catchments estimated at D+. Dr Maxwell stated that for dryer periods, with no major flooding or Q-event, that Urban Catchments produced not only all the sediment, but the nutrients as well. But there is a low investment in Brisbane’s waterways for rehabilitation compared to the upper reaches of major rivers/creeks.

There appears to be little in the way of assessing chemical or hydrocarbon pollution, including the damaging presence of fire retardant chemicals. This is another reason to seriously consider the need for an Urban Nutrient and Pollution Reduction Strategy. Three urban nutrient seminars, initiated and financially supported by B4C and Brisbane Catchments Network, have been held. And Port of Brisbane has committed to sponsoring another five seminars over five years in its new plans for Lower Brisbane River Catchment.

Ways to improve Waterway health:
1. Protecting existing critical streambank vegetation and wetlands from clearing and weed infestations (currently 83% vegetated lower Bris River catchment).
2. Population pressures: Over the next 25 years Brisbane will go to 1.5m people, so protecting and enhancing the condition of local waterways will be critical.
3. Personal responsibility – to ensure our properties are not adding to the runoff pollution. Industry and business has a greater role to play here and they have a huge responsibility.
4. Improving access to waterways can increase community connections and interest. 59% of residents feel nature is an important part of their lives.
5. Awareness campaigns highlighting the value of waterway can improved community responsibility and interest. Environmental concerns.
6. Not in summary, but Water Sensitive Urban Design has to increase and be complied with.
7. 30% of residents were willing to donated time towards local waterway protection.