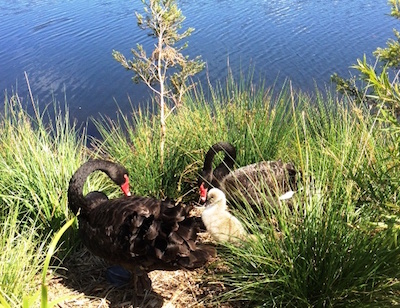 Last year a beautiful lake on the Gold Coast was under pressure to be filled in for a carpark. The local Council was considering this proposal because it was led to believe the lake was badly polluted, despite being home to a plethora of native aquatic birds.

B4C helped fight this with an initial water analysis in 2015, which helped the locals defend the lake successfully.

Last month, B4C presented another full independent water analysis report for Black Swan Lake at Bundall to the local carers, campaigners and Wildlife Queensland members who protect the lake. It was a pleasure to have it accepted by local campaigner Sally Spain of WQ.

B4C’s Wayne Cameron said it is fortunate to have scientists of this calibre providing professional services, when protecting the environment.

The analysis compared last year’s independent report with the latest findings of 2016. Nutrient pollution is dropping and the lake is improving substantially, thanks to actions of the local community, now supported by Gold Coast Council.

“As we presented and joined the locals on the shores of the lake two Black Swans and a signet joined us. They seemed to know that their lake and habitat was in caring hands. A coincidence maybe, but approaching us within 2m was uncanny experience” said B4C Manager Wayne Cameron.