Progress with the decision makers is the main focus for most conservation groups, including Redlands-based KAG.

“The numbers of submissions and letters and other stuff we’ve written over the years has just been mind boggling,” Debbie told guests at the B4C Sustainability Centre Open Day in Carindale on Saturday.

“I still believe that if you do not have your say in these things, you can’t come back at the end of the day and say ‘that’s not what I expected.’

“You have to have your say and, even though it’s not always listened to, we believe that our group has achieved better outcomes by all those zillions of letters and submissions and things.

“It still depends who is making the decisions at the time.”

“We need to know where our dogs are at all times.” 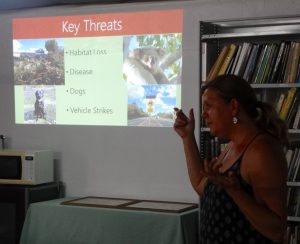 She says she also keeps an eye out for what her neighbours’ dogs are doing and that it’s important for all types of wildlife.

“I’ve rescued many a blue tongue and bearded dragon over the time.”

She says all of our wildlife is at risk if we can’t, at least, protect koalas.

Debbie showed guests a picture of a tree that had been cut down, while a koala was in it, in a shopping centre car park in Cleveland. It was spotted and photographed by a volunteer and the tree lopper was fined.

Unfortunately, she says, trees will be removed following complaints about minor things such as leaves falling on the cars.

“It’s very hard to slow people down if the police don’t get out there and police it,” Debbie says.

“The Redlands did trial some moveable LED lights, but they were only allowed on council roads not on the big state government roads.

“The [State] Government told us it’s too much of big distraction to have an LED light sign.

Therefore, the group relies on volunteers to tell them if strategies are working or not.

“The database seems to be in shutdown at the moment, no one seems to know what’s going on. The Labor Government have not been able to get it sorted out.” 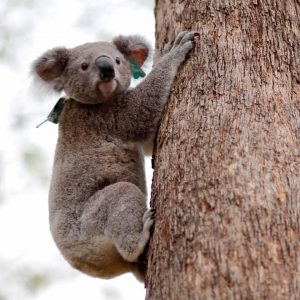 Debbie spoke about major KAG projects in their region such as fighting for koalas threatened by the Toondah Harbour development. KAG and B4C encourages everyone to get familiar with this project which is a threat to the environment on several fronts.

KAG volunteers have also picked up injured/deceased koalas from nearby locations such as Carindale, Mt Gravatt & Holland Park (despite being Redlands based).

With financial implications for developers, there has been much resistance to increasing the official threatened status categorisation of koalas.

Debbie discussed the pressure being placed on government for a Koala Protection Act.

The proposed Act, being pursued by the Australian Koala Foundation (AKF) is based on the following:

The KPA has been modelled on the Bald Eagle Act, which was introduced in the United States of America at a time when the country was preparing to enter WWII. The US Government recognised the urgent need to protect a species that was a National icon – one worn by their Generals.

The legislation demanded the Bald Eagle be treated with reverence.

It took 70 years, but it worked. It may take 200 years for the Koala to recover.

“The government needs to work out who they are representing – it’s either the development industry or the community … and the community appears to care for the koala, well most of the community cares for koalas,” Debbie says.

“It’s quite hard to engage the community,” Debbie says.

However, KAG has done well at getting young and old inspired.

“Planting seems to be the way we make the connection,” she says.

“We also go into schools and the kids really seem to get it [the need for koala conservation] … I must admit, I feel the next generation are going to be OK with getting it, but will it be too late?”

The group attends various festivals and other community events but Debbie says it’s much easier to preach to the converted. Those who say they’re “too busy” are harder to reach but they need to play their part for the future of wildlife, she explains.

KAG and B4C urges everyone to record koala sightings. The data collected is included in the Australian Living Atlas (ALA) database.

“The koala is a world-loved icon, not just in Australia,” Debbie says.

“We’re just not looking after it. It’s as simple as that. We’re not doing enough.”

“The community needs to work together to let all levels of government know that the environment is essential for wildlife and important to residents,” Heather says.

“Koalas are an iconic species that people recognise but only one of hundreds of species that rely on our natural areas.”

Heather referred to the recent local Salvin Creek campaign saying that it “highlights that Environment Protection Areas are valued by the community.”