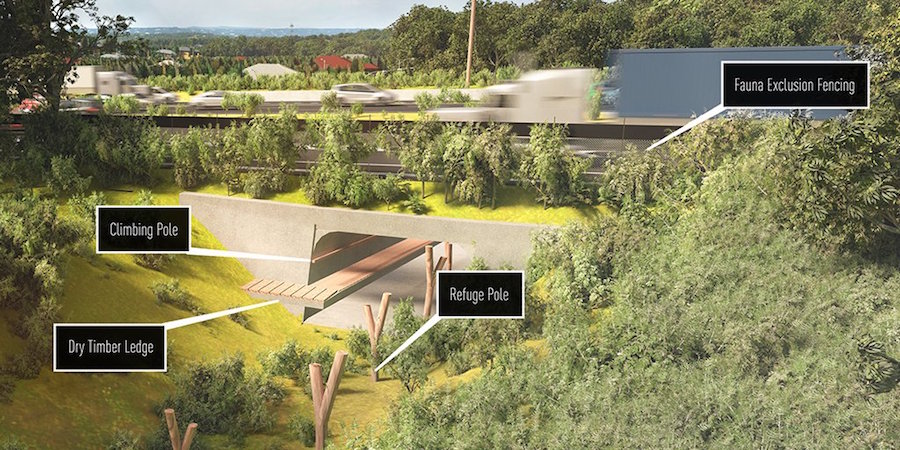 In a major win for wildlife, an important road ecology plan for fauna movement was approved as part of the Logan Enhancement Project.

The Environmental Reference Group (ERG), formed by Transurban and led by B4C, put forward its submission for the Flinders Peak to Karawatha wildlife corridor to form part of Transurban’s Logan Enhancement Project. The ERG has been regularly working to apply collaborative research with community action during the consultation period.

Professor Darryl Jones of the ERG and Griffith University praised the process and outcome.

“This is unequivocally the most significant win for road ecology in Australia so far,” Darryl says.

“When you realise that the previous most important event was the Compton Road Fauna Array – which is just about the road – we have had an achievement of serious international renown in our backyard.

“And it’s down to the careful, sensible, professional approach taken, and especially the leadership shown by B4C.

“But the work is by no means over – the invitation to continue as the Environmental Reference Group provides a vital opportunity to continue to scrutinise and comment.”

The ERG will be assisting to ensure a maximum benefit is given to the wildlife movement and habitat enhancements. This includes working with the contractors and monitoring the design outcomes.

In January 2017, the ERG is meeting to discuss the project with Transurban and the construction contractors.

Catchment Manager Wayne Cameron says the ERG was able to make a big difference and the approval from Transurban has addressed every area the group identified.

“We are relieved that Transurban has taken seriously the issues of biodiversity and sustainability in its decision making,” Wayne said.

“While we did not get everything we requested, it is a comprehensive mix of solutions across all the major areas which will mitigate some of the impacts of major road construction and infrastructure through a valuable wildlife corridor.

“We believe this could be the most significant win for road ecology in Australia so far. It may just be an achievement of international significance.

“We put in a well-considered proposal, with great thanks to young scientist Mel McGregor, and I believe we have achieved a major success for fauna movement.

“It was officially presented by Professor Darryl Jones, the best possible scientific spokesman for fauna movement solutions,” he said.

“The Council officers provided professional advice which is reflected in the way we were treated by Transurban and how they responded to our proposals,” Wayne said.

Detailed design of the Logan Enhancement Project will start in early 2017, with construction anticipated to commence in mid-2017 and taking approximately two years to complete.

B4C has created a page for this fauna movement solutions project where it will provide on-going comprehensive project details, implementation and outcomes as they occur.