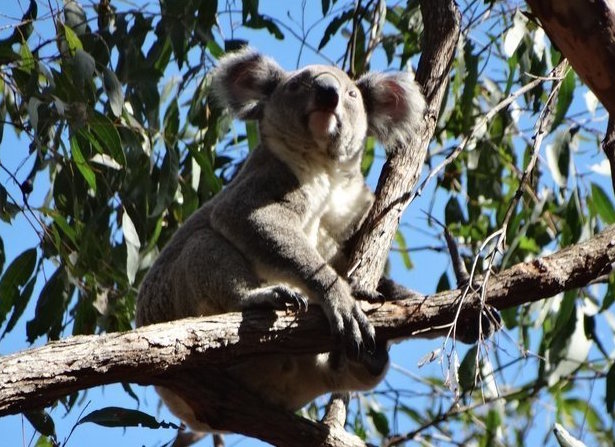 Thanks to people power and constructive discussions with Queensland Sports Minister Mick de Brenni there has been some great news for South-East Queensland’s koalas.

Minister de Brenni has confirmed that a new environmental analysis will be done on an amended design for the Belmont Shooting Complex expansion, almost eliminating the proposed clearing of koala bushland. The new design shrinks the proposed clearing from 5.4 ha to just 0.2 ha, with a plan that allows the complex to fit their development into its existing footprint. The complex is located in State owned land that forms a major part of the Belmont Koala Forest.

“Any government that wants to clear koala bushland is taking a big risk – people care deeply and passionately about koalas. Our campaign received strong community support both locally and across the City,” Mik said.

“The Minister, to his credit, has now worked very hard with the department on a solution that works for all the stakeholders. We are thankful to the minister for leading the Department to find an alternative solution to the biodiversity issues associated with the proposed Ministerial Infrastructure Designation.”

An independent advisory panel has been proposed and we hope it can recommend a solution that is satisfactory for all parties, to minimise the environmental and biodiversity impacts of the amended proposal.

The Minister acknowledges the high environmental significance of the Belmont Koala Forest where the Belmont Shooting Complex is located. He says that a review and update of the broader site-wide environmental and biodiversity management strategies is a useful next step and the B4C supports this view.

“We hope that the review would take a comprehensive approach to biodiversity including a better understanding of plants and animals in the surrounding forest and how connectivity can be improved,” Mik says.

B4C’s concerns were quickly supported by now Lord Mayor Adrian Schrinner (then Councillor for Chandler). He quickly instigated a motion in Council that led to an extremely rare unanimous Brisbane City Council vote against the expansion, supported by LNP, Labor, Greens and Independent councillors.

The B4C looks forward to constructively collaborating with all the relevant stakeholders to achieve a practical world’s best practice outcome for the club, the site and the surrounding Belmont koala bushland.

“Our concerns are not with shooting or the current use of the facility. We were always concerned about protecting remaining habitat and wildlife on State Government owned land,” Mik says.

The Belmont Koala Forest is highly rated in all nature conservation categories, incorporates one of our city’s small mountains (Mt Petrie) and has a unique collection of native wildlife. The Atlas of Living Australia lists over 100 species of plants and animals in the Belmont Koala Forest and the Moggill Koala Hospital lists 100s of koala sightings adjacent to the forest. It is recognised as essential habitat and a regionally significant area in State and regional interest mapping.

“We are hopeful that Minister Mick de Brenni has laid a foundation to protect and restore this important natural area both now and into the future working in partnership with B4C, other local groups and the Brisbane City Council,” Mik concluded.