The Carmichael Park Bushcare Group (CPBG) grant project has recently finished and the following explains what was involved and the benefits to the community. 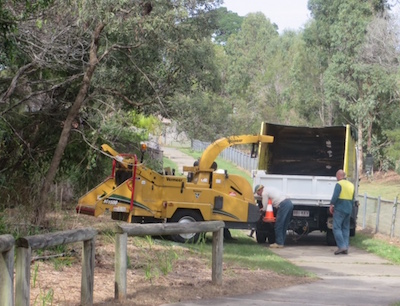 CPBG hired a contractor (Heritage Tree Care) to remove the camphor laurel trees from the wildlife corridor between their bushcare site and Tingalpa State School.

The camphor laurel is a declared weed tree and inhibits natural regeneration.

The trees were mulched and the mulch was spread at the bushcare site to assist with the suppression of other weeds.

A bobcat was hired to spread the large quantity of mulch, which would have taken the bushcare volunteers many working bees to move.

Progress shot. “What a difference a day makes. From dark and tangled mess to light and open. Well there is still some tangled mess but it looks so much better already and can see the lovely melaleucas” – Lesley Miller, Carmichael Park Bushcare Leader

The group subsequently planted native trees that will be food and shelter for squirrel gliders, koalas and other wildlife that inhabit the area.

CPBG Leader Lesley Miller said there was excellent progress at the site and that it allowed the melaleucas to be seen.

“What a difference a day makes. From dark and tangled mess to light and open,” Lesley said.

B4C Secretary Heather Barns said the community benefits from the removal of the exotic trees as they have the potential to spread seed further afield into the school grounds and neighbouring properties.

“The area is now looking much more attractive and not just a weed ridden space where people feel inclined to dump rubbish,” Heather says.

“It’s received plenty of comments and new people are joining the bushcare group to assist.”

“There are already signs of regeneration with wattle and poison peach seedlings already identified.”

The CPBG members have planted 320 trees, shrubs and grasses in the cleared and mulched areas. 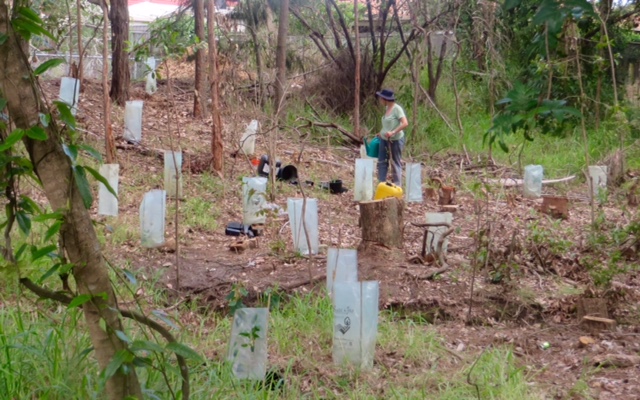