The Compton Road wildlife overpass at Karawatha Forest in Brisbane is described as “ridiculously successful” by Griffith University’s Professor Darryl Jones. It’s being used as a guide by other countries. Australia still has only 5 fauna overpasses. Very few compared to France’s 380. 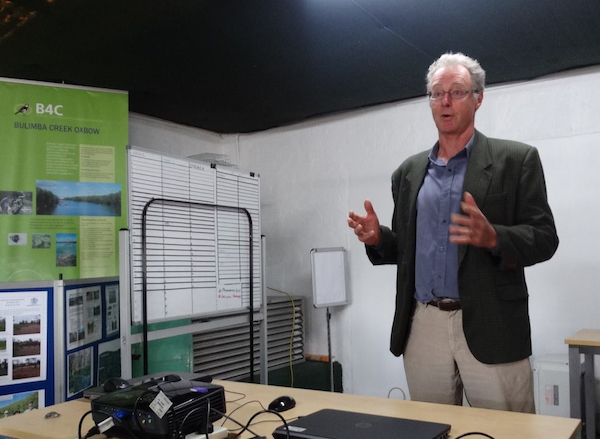 The structures at Compton Road have been studied over the last 10 years. The monitoring started after six months from completion to ensure disturbances to wildlife from bulldozers, revegetation etc had settled. But it had already started being heavily used before it was even finished.

“During that first summer, every night, 45 animals were using the structures,” Darryl told guests at the B4C Sustainability Centre August Open Day. (see slides from Darryl’s presentation at the end of this page)

“And 10 years later there’s entire generations of little birds, little animals and all sorts of big animals, who use it naturally – they don’t even know there’s a road there.”

Darryl said he originally thought about wildlife crossings as just a means to get wildlife from A to B safely. The Compton Road structure, he explains, has achieved much more. 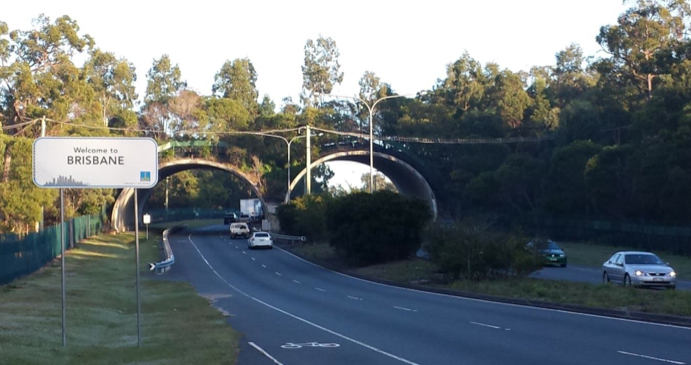 Compton Road fauna overpass in 2015, as seen from the west

“When you have a fully vegetated land-bridge, like the one at Karawatha, that’s actually habitat,” he says.

“They did an amazing job, looking in the forest and saying we need these species of trees and shrubs and grasses and everything else and that’s what we’re putting on the land bridge and when it grows it will just be continuous forest going over the other side.

“Because what you want is the animals to walk over the hill and cross the road and not even know.

For example, following undertaking bat detection techniques, Mel produced heat maps showing bat numbers around the road, the bridge and deeper into the forest. (View slide 8 at the end of this presentation to see the patterns).

It, like the other studies, shows the attraction by wildlife to the bridge.

He said that while Compton Road was a leader and had lead to international counterparts referring to the “Compton effect”, there are only five fauna overpasses in Australia.

Darryl and others have been involved in discussions with Transurban about the major upgrade planned for the Logan Motorway. 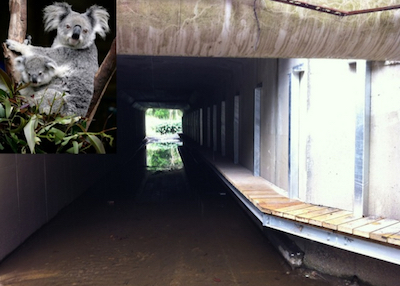 He also spoke about other projects that involved retrofitting existing infrastructure such as installing ledges.

There are a great number of culverts (structures underneath roads etc to allow water to flow under), making it very easy and cost effective to put in place a ledge. This is then paired with a  fence to keep the wildlife from using the road and instead choosing the ledge.

And they have had much more success than what Darryl says he expected, with echidnas being one of the most common animals using them.

“So we have a cheap, simple and thoroughly effective way for koalas to stop getting killed on roads.”

He praised the leadership of Brisbane City Council’s Kristy Thomson in driving this.

Mt Gravatt Capalaba Rd through the Brisbane koala bushland is described by Darryl as a “death trap for koalas”.

In this area the road will be a different colour and will display interactive electronic signs.

“With static signs, people just get habituated to them,” Darryl says.

If it’s successful it will be rolled out in more places.

The second trial is at Wacol Station Road where there are more than 2000 grey kangaroos nearby. This trial is more about safety of vehicle passengers.

B4C’s Catchment Manager Wayne Cameron says that Australia has produced some of the best and most meaningful research through Griffith University.

“Darryl Jones has been a leading light in the development of fauna movement solutions in Australia and is recognised internationally for this,” Wayne says.

“PhD candidate Mel McGregor provided startling information on the use of underpasses, overpasses and other solutions on a wide range of a native species. some of the results, particularly those for microbats and birds, prove outstanding results from the development of fauna movement solutions.

“Brisbane itself and its local government have been quite innovative with the Compton Road solution. But now we need some other examples, not just building on the facts from the research, but also employ some innovations on what we believe will add diversity and success to designing specific fauna movement solutions.

“We have to look not only to government to support and fund this, but also our major road upgraders and builders, for example Transurban, DTMR to include this essential green infrastructure into their engineering designs.

“B4C together with Karawatha Forest Protection Society and Griffith Uni have combined to promote these solutions and innovations with Transurban for the Logan Motorway enhancement project.

“We were part of a consultative community committee which provided multiple and varied solutions for the motorway fauna movement from our own research and experience.